SUMMARY: In a vineyard, there are half a million emitters tracking soil moisture. You’re a worker tasked with checking specific emitters. How do you efficiently navigate to the right ones? Green THUMB is our ergonomic solution to allow vineyard workers carrying the DATE device to navigate to a specific emitter.
USERS: Vineyard owners and employees, especially those in California as we work to first implement this solution in California vineyards (Napa Valley and adjacent counties).
ROLE: User Researcher, Led Prototyping 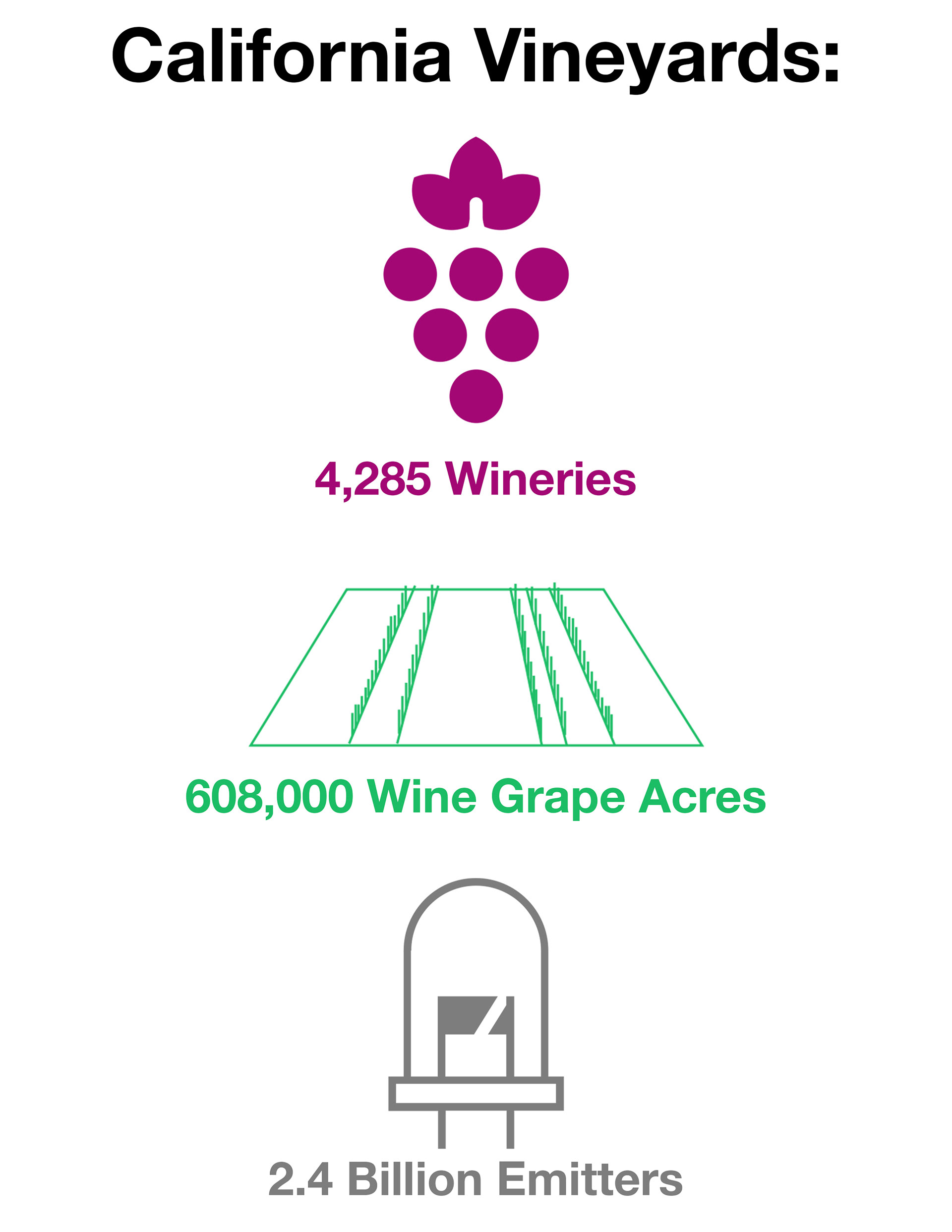 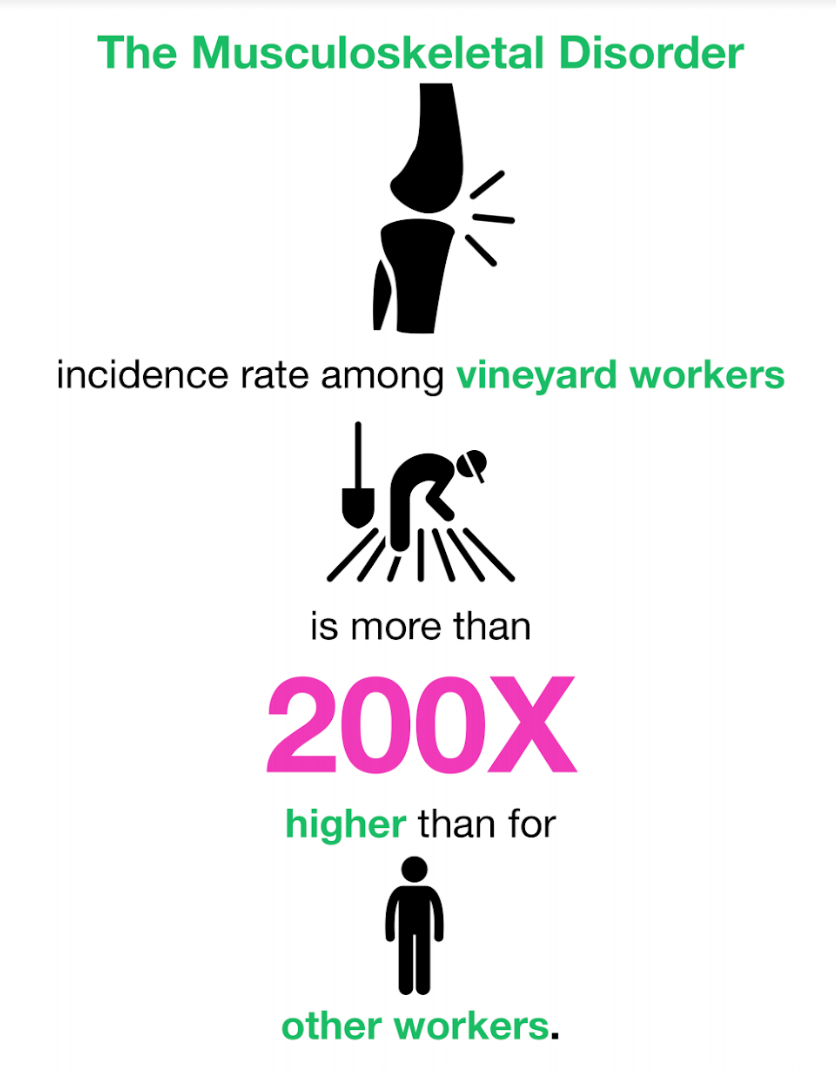 Who is having this problem?
There are 4,285 wineries in California as of 2014, and about 608,000 acres of wine grapes in California. If there was an emitter placed every square meter then there are approximately 574,000 emitters per winery in California. If every winery were to use the DATE system, that would mean that there are about 2.4 billion emitters in California alone. A system of that scale would require a significant amount of labor.
Why is this a problem?
Studies suggest that the Musculoskeletal Disorder incidence rate among vineyard workers is 149.5 per 1,000 people, well above the targeted incidence rate of 66 per 100,000 workers.
Assumptions:
Primary user’s first language is Spanish
1 free hand for UI interaction (considering dimensions and weight of DATE)
Some part-time workers
Frequent turn-over of workers
Durable & water resistant
Primary user’s age: 49% is under 35
Constraints:
Minimize physical interaction with UI
Cost of the device’s hardware
Dimensions
Weight
Battery Life
Prototype Summaries:
Our inspiration first drew from GPS watches and fitness trackers (Fitbit), as they are hands-free data collecting devices. As the VitiWatch (a Fitbit-style device) failed stress tests for both comfort and usability, we pivoted and tried to figure out a balance between visual and haptic feedback that would provide the ideal interface. Drawing further inspiration from Rave Flashing Finger Lighting Gloves, we came up with The Green THUMB: a fingerless glove device that primarily relies on haptic feedback for navigation, with supplementary light elements. 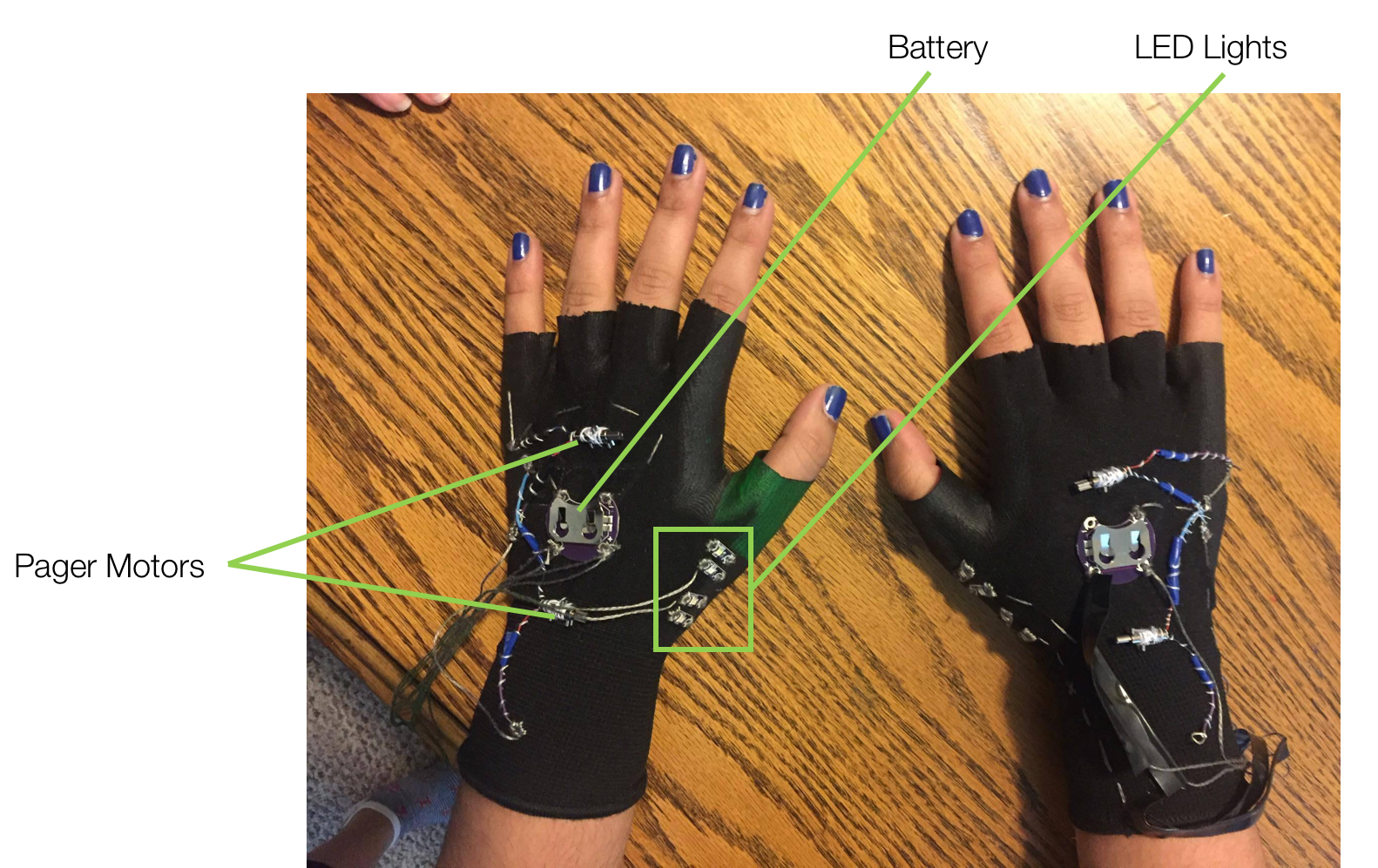 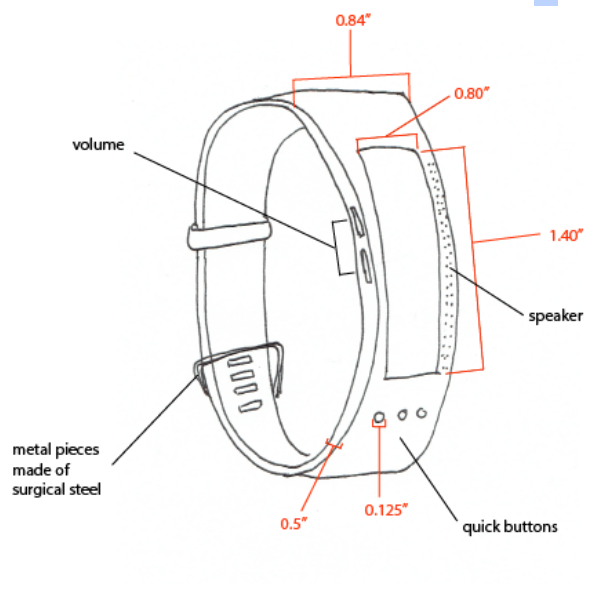 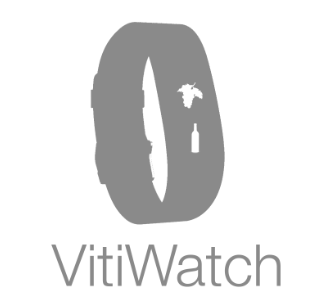 Iteration/Realization: We created a motion graph to determine usability of the screen method versus the watch.

We decided to go with  our Green THUMB ideation next. We’ve built fingerless gloves, one for each hand, which employ haptic and visual features to help workers navigate to a particular emitter. Our device receives signals from a “master map” which knows where the emitter is. The glove on a particular hand vibrates, signaling that the user must turn left or right. LED lights embedded in the gloves denotes the progress a worker has made to reach/pair with the emitter.
What each vibration means:
Left Hand Pager Motors (single pulse)=Turn Left
Right Hand Pager Motors (single pulse) = Turn Right
Back Pager Motors (single pulse) =Turn around and start walking
Left Hand Pager Motor (repeated pulses) = Approaching the emitter on the left
Right Hand Pager Motor (Repeated pulses)=Approaching the emitter on the right
What each LED light means:
Green: When you have reached the correct emitter and are pairing with it.
Red: You are heading in an incorrect direction
Red and Green: The gloves are low on battery.
We decided to focus on haptic feedback as much as possible to minimize how often vineyard workers need to raise the gloves to look at them. However, we quickly realized that there are a number of additional, rare commands that would be hard to give with just haptic feedback. Hence, we also added red and green lights for additional feedback.
We were worried about a user having to wear the gloves all day outside, in the heat. Hence, we made a decision to make the gloves fingerless, as we thought this may help with making the gloves more comfortable to wear all day.
We also picked the glove concept over other form factors, such as a ring, because we felt like the glove balanced size well: large enough to provide enough space for all components (surface area for multiple vibration motors that are far enough apart to be distinguishable from one another and batteries of a large enough size to last all day).
We had two phases of testing. Initial testing compared the ergonomics of the Green THUMB to a screen mounted on DATE. Next, we tested how well each user interfaces does at finding emitters. Performances of each UI were compared against each other in each phase of testing.
Phase I: Ergonomics
The main purpose of the Green THUMB is to reduce physical strain and limit Work-Related Musculoskeletal disorders over time.
12 emitters were placed in a 6 x 6 foot grid to imitate grape vines.
Each participant used prototypes of the two differing navigation systems to find emitters.
Screen mounted on to the DATE with replaceable emitter ID cards
Prototypic gloves with a team member guiding participants by voice.
Participant carried out finding emitters for 5 minutes for each navigation scenario. 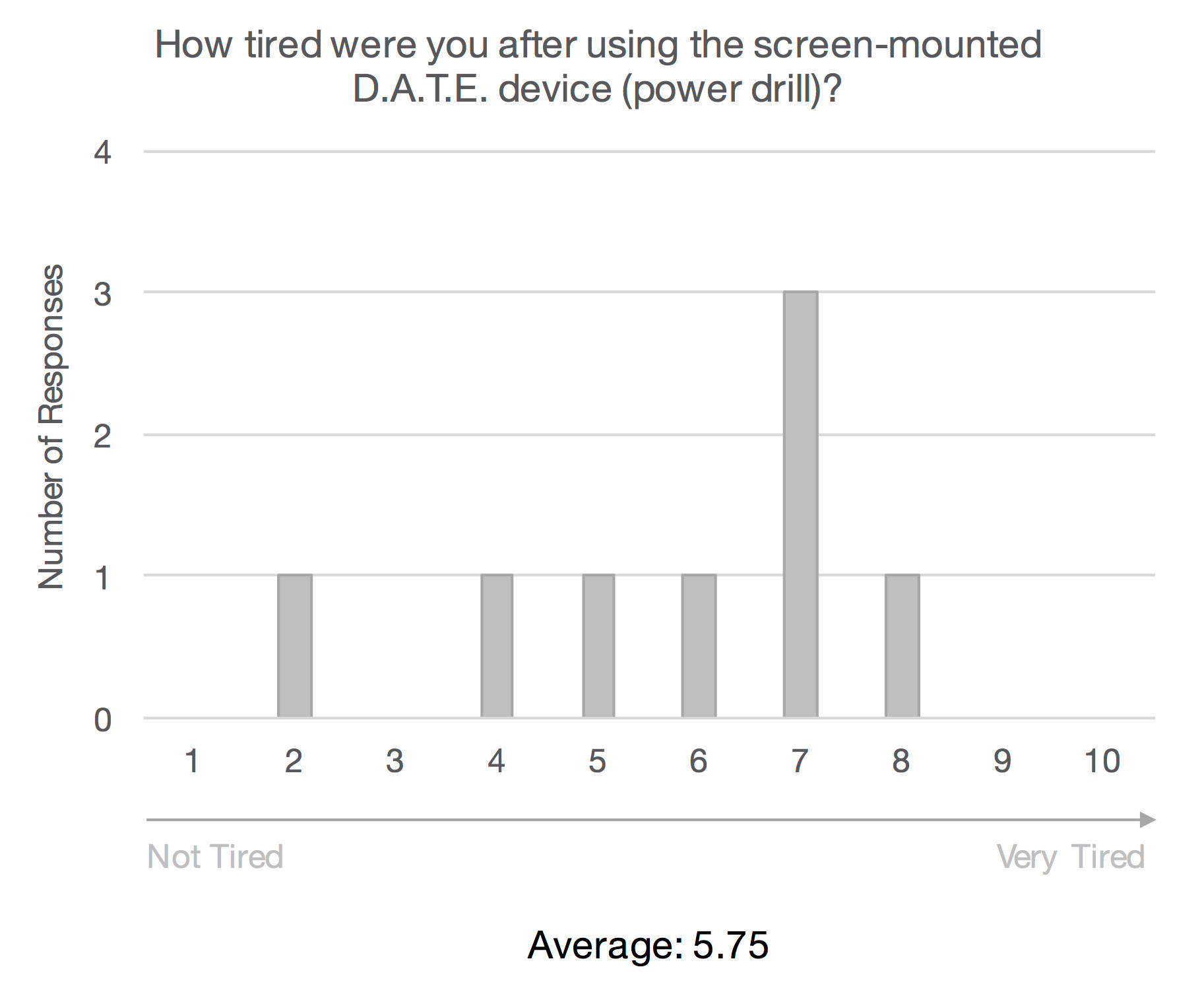 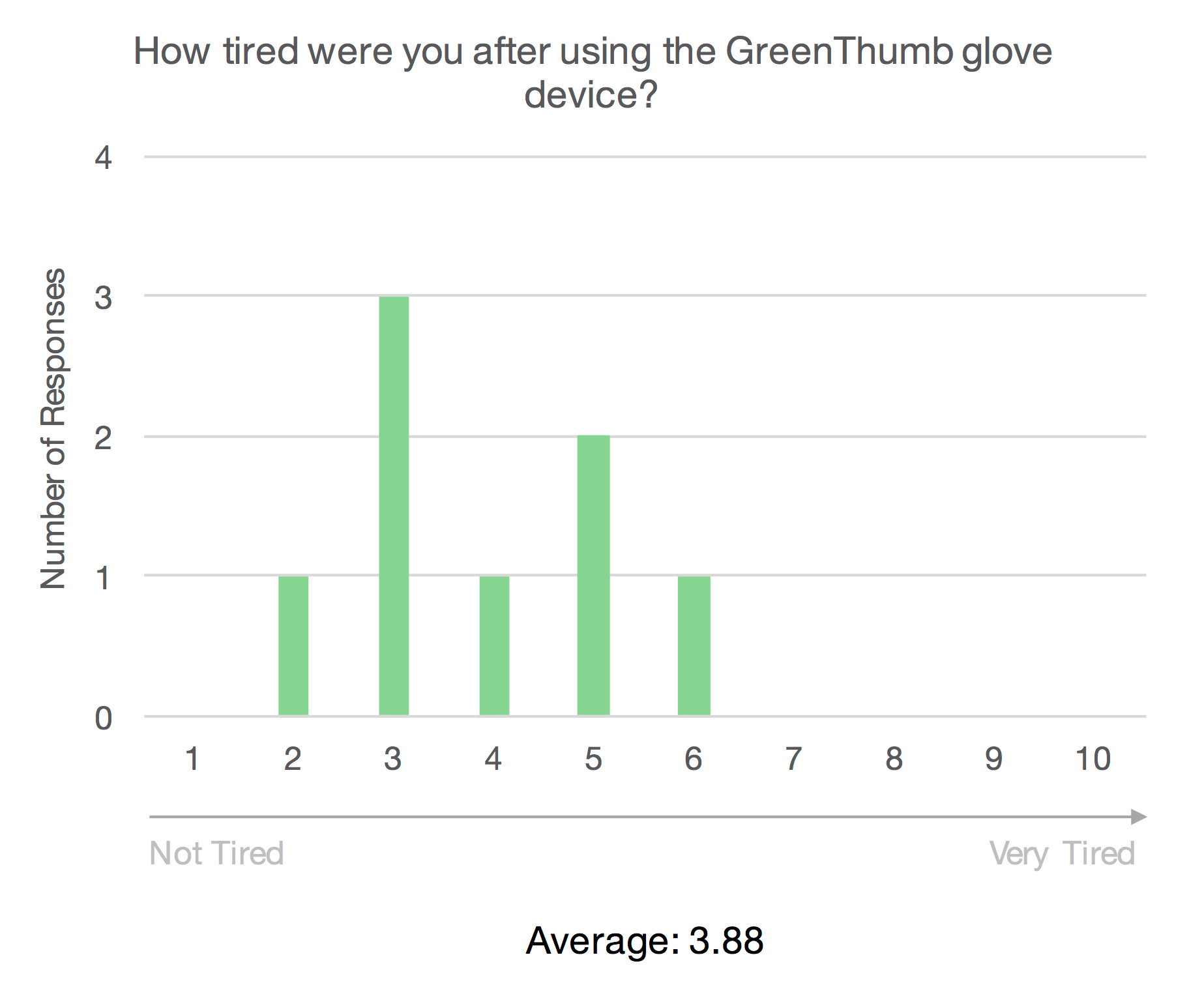 Phase II: Usability
Using a virtual vineyard interface programmed to simulate emitters, we tested the product’s usability by taking turns being the test subject, the interface information input, and the timer.
Since The Green THUMB we used for testing is a Beta version of the final product, we were not able to remotely control the haptic and visual feedback on the gloves. Instead, wires were attached from the glove to a motherboard to give us control over the glove.
To simulate similar testing conditions as the Green THUMB, we also used our virtual vineyard to test a “screen on a DATE” model. A second laptop with texted directions served as the “screen on the DATE” model, while the gloves’ pager motors were controlled by buttons by two people standing behind the test subject.
Following the suggestion of one of the guest judges during our final presentation, one of our members wore the gloves for a prolonged period of time (5 hours). The member found the gloves to be bearable for such a long period of time.
Compared to the “screen on DATE” model,  the Green THUMB significantly reduces repetitive motion. Participants also prefer the Green THUMB over the screen mounted on the DATE.
References
Bureau of Labor Statistics (BLS) 1997
UC Davis, Agricultural Ergonomics Research Center
US Public Health Service in Healthy People 2000 (Healthy People 2000, 1991; objective 10.2) (http://ag-ergo.ucdavis.edu/vineyardjmm/)
https://www.wineinstitute.org/resources/statistics/article124
http://www.wineinstitute.org/files/Wine_Institute_2015_Economic_Impact_Highlights.pdf
https://www.wineinstitute.org/resources/lifestyleandtravel/article336
http://goldberg.berkeley.edu/pubs/case2016-DATE-precision-irrigation-submitted.pdf
http://www.afb.org/afbpress/pubnew.asp?DocID=aw160707

Muse
↑Back to Top

Insert copy here, which should vary depending on your region. Accept